If you’re fascinated by the mosaic-like stone inlay work of Native American jewelry you must visit the exhibition called “Glittering World” at the Smithsonian National Museum of the American Indian in New York City.

Running through January 10, 2016, the showcase of nearly 400 items tells the story of Navajo jewelry through the lens of the gifted Yazzie family of Gallup, N.M. Many of the items are so labor intensive that brothers Lee and Raymond must limit their output to no more than 10 pieces per year. It’s not unusual for a single bracelet to contain 500 meticulously inlaid stones. 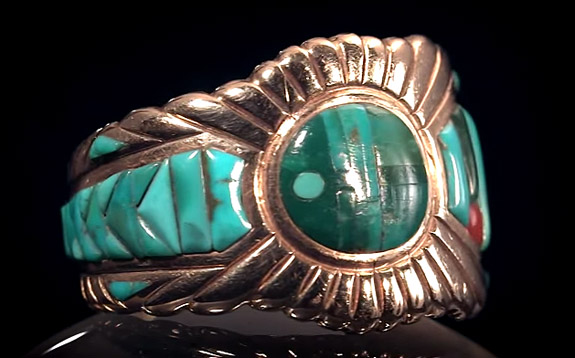 Many of the extraordinary items on display are crafted in turquoise, which is a sacred stone of the Navajo people. Turquoise reflects the color of the water and the sky, and is an essential part of Navajo prayer offerings. Its use in Native American culture dates back to about 300 A.D. and the gem continues to carry both a spiritual and economic value.

The Yazzies take traditional themes and materials and then add a contemporary aesthetic. Lee is a master of metal and stone, while Raymond specializes in brilliantly composed mosaic inlays. Sister Mary Marie is known for her fine beadwork and stonework.

The Yazzie children — 12 in all — grew up in an eight-foot hogan, which is a traditional hut made of logs and earth. Their father was a medicine man and both parents made jewelry, according to the Albuquerque Journal.

The contemporary Yazzie designs — which include rings, bracelets, necklaces, belt buckles and more — are juxtaposed against a background of historical pieces from the museum’s collections. Together, they tell a story of art, commerce and cultural expression. Recurring themes include sun, wind, corn and mountains.

Guest curator Lois Sherr Dublin told the Albuquerque Journal, “I like the pieces that in miniature capture heroic and epic ideas. It’s the echo of the landscape and the sculptured content of the stone. It’s the play of the blue and the red. It’s evocative, but at the same time they can stand alone. It gives that extra layer of meaning.”

The Smithsonian’s National Museum of the American Indian is located at the George Gustav Heye Center in the U.S. Custom House near Battery Park. The attraction is in Lower Manhattan, a short distance from the Freedom Tower and the Statue of Liberty. Admission is free. For more information, call 212-514-3700 or visit americanindian.si.edu.