Californian Pays $4.8M for 26 Cents, Compares 1792 Penny and Quarter to the Mona Lisa

A California man plunked down $2.585 million for a U.S. penny dated 1792, setting an auction record for the highest price ever paid for a one-cent piece. On the following day, his winning bid of $2.232 million at Heritage Auctions secured a 1792 quarter, bringing his two-day tally to $4.8 million for a pair of coins with a face value of a mere 26 cents.

Not so, counters Beverly Hills coin wholesaler Kevin Lipton, who compared his newly acquired 1792 “Birch Cent” and “Wright Quarter” to the priceless paintings of Leonardo da Vinci. “They are literally Mona Lisas of our coinage,” he told the Los Angeles Times.

The 1792 Birch Cent, which is named after its engraver, Robert Birch, is the finest example of only 10 similar coins known to exist. They were experimentally produced after the founding of the U.S. Mint as part of a series of prototype coins.

“It’s like our very first penny,” Lipton told the Times. “It’s such a spectacular coin. It’s so important, so rare.”

The Birch Cent features the profile of Miss Liberty with flowing hair framed by a motto that was soon abandoned, “Liberty Parent of Science & Industry.” The other side says, “United States of America” and shows the denomination of “One Cent" within a wreath. At the bottom is the fraction "1/100."

"It’s a gorgeous coin, breathtaking,” Lipton told Reuters. “And the history is important. This is our earliest depiction of what we thought of ourselves as a nation.”

Lipton told the Times that he had his eye on the Birch Cent since he saw it for the first time at a New York auction house in 1981. At the time, it was purchased for $200,000 by a New York City developer. 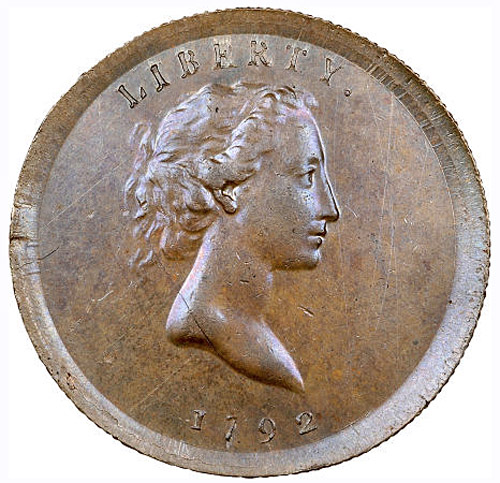 Lipton’s 1792 "Wright Quarter" is special because it's America's first quarter and because the only other example known to exist is in the Smithsonian.

The intended denomination of the Wright Quarter has been debated for many years because there is no indication of value engraved on the coin. It features a beautifully executed profile of a woman with the word "Liberty" written atop and the date below.

The reverse side has an eagle standing on a globe with the words "United States of America" surrounding it. The coin was designed by Joseph Wright only one year before his death.