A British jeweler has designed an engagement ring that can track the wearer’s every move. Called the “Fidelity Ring,” the bridal jewelry is equipped with a wafer-thin Bluetooth chip that is discreetly slotted behind the precious stone.

Now insecure men will be able to track the whereabouts of their brides and brides-to-be in real time — assuming their significant others are willing to wear the ring.

Steve Bennett, the CEO of Gemporia, told The Daily Mail that the GPS technology behind the Fidelity Ring was originally intended as a way to protect jewelry from loss or theft. Bennett was looking to develop an “unloseable” ring. 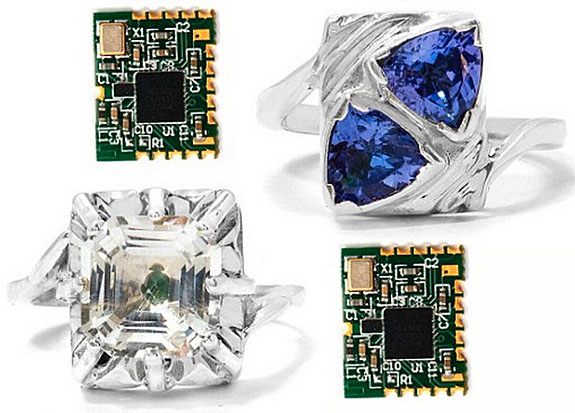 “In many cases the sentimental value of treasured pieces far outweighs any monetary worth,” he said, “and I wanted to do anything and everything I could to prevent this. With GPS installed in your jewelry, the chances of getting a piece back if it’s lost or stolen increases 10-fold.”

The GPS tracking device, which is smaller than a thumbnail, is hidden behind a sizable square-cut diamond in one prototype ring, and behind a pair of triangle-cut purple-blue gemstones in a second prototype.

Bennett is also looking at other uses of this tracking technology, such as in children’s jewelry, so parents can keep tabs on their loved ones. Customers have also inquired about trackable rings for couples, according to Bennett.

"The implications are limitless,” he told The Daily Mail. “This could be the end to baseless jealousy and unfair accusations; this ring could safeguard the institution of marriage.”

Bennett did not provide details on the chip’s range, how it is powered or what it will add to the cost of a ring.

Images: Gemporia via The Daily Mail