An ultra-rare 2.09-carat red diamond broke another auction record at Christie’s Hong Kong yesterday when it sold for an unprecedented $5.09 million, or $2.44 million per carat. 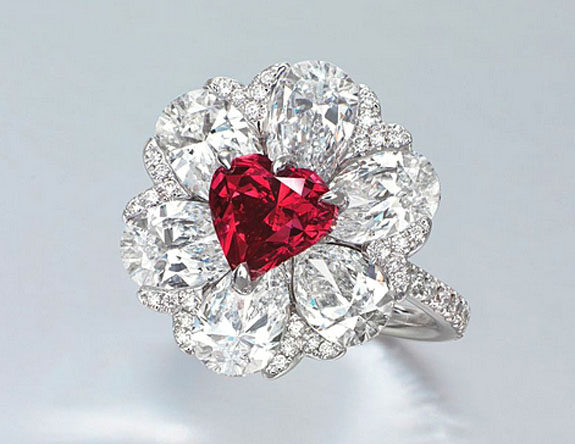 The heart-shaped fancy red diamond, which now holds the title of most expensive red diamond ever sold at auction, puts an exclamation point on an extraordinary month of auction record breakers — two red, two blue, two sold by Christie's and two by Sotheby's.

• On Monday of this week, we reported on a 9.75-carat blue diamond from the estate of Rachel “Bunny” Mellon that sold for an extraordinary $32.6 million at Sotheby’s New York. The fancy vivid blue stunner shattered two auction records, including the highest price ever paid for a blue diamond — and for a diamond of any color.

• In mid-November, Sotheby’s Geneva established two auction records — including the highest price ever paid for a ruby — with the sale of the 8.6-carat “Graff Ruby” for $8.6 million.

• Only a day earlier, the 392-carat “Blue Belle of Asia” sapphire set a world record for the highest price ever paid at auction for a blue sapphire when it fetched $17.3 million at Christie’s.

Yesterday's record-breaking red diamond was scooped up by a private Asian investor, according to Christie’s. The selling price of $5.09 million was slightly above the auction house's pre-sale high estimate of $4.92 million.

London luxury jeweler Moussaieff designed the ring in a flower motif with the heart-shaped red diamond as the center and six pear-shaped diamonds of approximately one carat in size representing the petals.

Another top lot at the Christie’s Magnificent Jewels sale in Hong Kong was a 10.1-carat pigeon’s blood red ruby and diamond brooch by Cartier. Selling for $8.4 million (more than double the pre-sale-estimate of $2.59 million to $3.88 million), the cushion-shaped ruby is the centerpiece of an openwork octagonal plaque set with square, rectangular and triangular-shaped diamonds.

The internally flawless blue diamond is surrounded by marquise and brilliant-cut pink diamonds in an 18-karat rose gold setting.